How To Create A Saltury Makeup

Home » Makeup » How To Create A Saltury Makeup 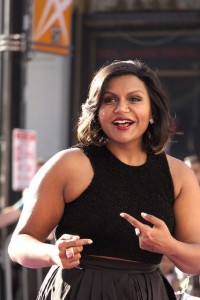 Here is a different look for you to create at home. A sultry look created for Mindy Kaling – by Katey Denno with products focused from the world of “Green Beauty” and non toxic cosmetics – definitely a good principal to follow.

Who is Mindy Kaling?  Actress
Vera Mindy Chokalingam, known professionally as Mindy Kaling, is an American actress, comedian, and writer. She is the creator and star of the Fox and Hulu sitcom The Mindy Project, and also serves as executive producer and writer for the show. (Wikipedia)

Check out this lovely look Katey created for Mindy

Mindy really is as cute and beautiful, smart and funny, and as much fun as you’d think she’d be. I’ve been inspired by all she’s done since we first met a few years back. Plus, just being around her has made me rethink my usual uniform of solid color black, gray, navy, and white. Her love for bold color and clothing with print, pattern and design has rubbed off on me immensely.

I don’t watch television at home, so I usually play catch up on The Mindy Project when I’m traveling by watching episodes back-to-back on the plane. Recently I was in a hotel room during a particularly long travel job, missing home and feeling downright homesick, so I decided I’d turn to the television to keep me company before bed. I casually turned it on and walked into the bathroom to brush my teeth, when I heard a familiar voice coming from the tv, and felt so overwhelmed with happiness – it was like I was sitting in Mindy’s dining room, going over the hilarious night she’d had. I actually walked back into the bedroom and smiled at the television as if I had just run into an old friend.

In the pics above we were in Mindy’s office, and it was one of those times she’d told me to go for it and make the decisions on the makeup look for the evening event she would be attending. I was particularly proud of myself for this one.

As always, the majority of products I used for the look are from the world of the green beauty market. If you’re not familiar with them, follow the links to learn more about each one.  I’ve been focused on exploring the non-toxic cosmetics industry for years now and have found the best of the best.

On her eyes: I blended two Kjaer Weiss shadows, in ‘Divine’ + ‘Onyx’ all over her lid, and softly under her bottom lash line.