WHAT! Toxins In Your Kitchen And Pantry?

Home » Healthy Living » WHAT! Toxins In Your Kitchen And Pantry?

We have found 10 – yes 10 Toxins that can be found in your Kitchen and Pantry!

What Exactly are Toxins, and Where Do They Come From?

A toxin is defined as any substance that causes harmful effects to our body. Normally, the immune system, liver and kidneys work together to remove toxins at the same rate as they are encountered. When toxin levels are in excess of our body’s capacity to remove them, they build up and are stored until they are removed. We can have toxins stored in our bodies for years without experiencing any negative symptoms, but once the burden of toxins becomes too high, we start to feel ill. We tend to think about toxins coming from environmental sources such as exhaust fumes, solvents and inhalants, but it is important to consider the other numerous, less apparent toxin-producing sources we are exposed to on a daily basis. These include toxins from our lifestyle, toxins created within our bodies (internal toxins) and toxins created from our emotions. Plus…. the ones we don’t think about that can be lurking in your Kitchen and Pantry!!

Check out these 10 possibilities by Jayane Leonard

10 Hidden Sources of Toxins Lurking In Your Kitchen & Pantry 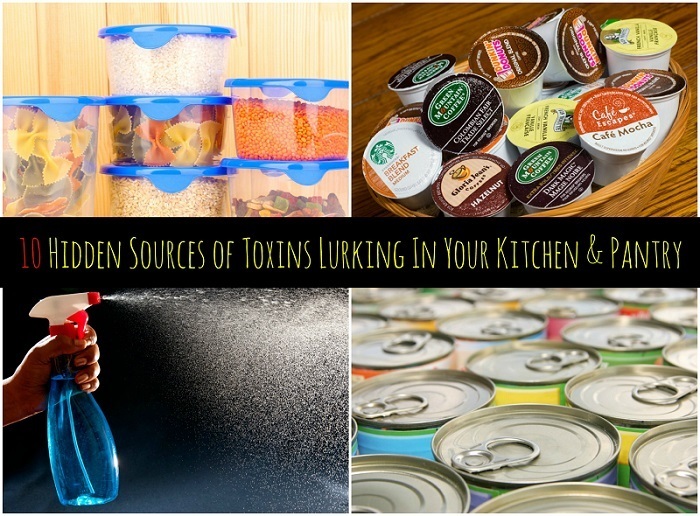 With more than 84,000 chemicals legally for sale in the US, it’s not surprising that our air, food, water, and homes are toxic environments that may be compromising our health.

After all, toxins can wreak havoc on our bodies – they mess with hormones, cells, immune function and mental health.

While we can’t control every exposure we have to chemicals, we can certainly control a lot of what we’re exposed to in our own homes.

Where better to start than where we prepare our food? From cookware to coffee, discover the hidden sources of toxins in your kitchen.

Canned foods are incredibly convenient aren’t they? Canned tomatoes are a pantry staple, used in everything from curries to soups; canned fruit makes a quick and reasonably healthy snack or dessert; and canned soup is ideal for those days when cooking is too much effort – unless you intend on cutting down your sugar intake.

But when you eat these canned foods, you’re getting something else that’s not listed on the label – a type of plastic which lines the can, known as BPA (Bisphenol-A).

To quote Dr Mercola BPA is ‘fine, if you ignore most studies on it’!

This scary chemical is believed to disrupt hormones and even mimic the effects of estrogen in the human body.

While the FDA have previously claimed that BPA in food packaging is perfectly safe, in 2010 they altered their position, stating they had ‘some concerns’ about possible effects of BPA on the brain, behavior, and prostate glands in fetuses, infants, and young children.

A study published in the Journal of the American Medical Association found that people who ate canned soup for five days saw their urinary levels of the chemical BPA rise by an incredible 1,200% compared to those who ate fresh soup.

Numerous studies have linked BPA with:

Are you sold on the health-destroying abilities of BPA yet?

If so, you can avoid this chemical, particularly in relation to food, by buying products that come in BPA-free packaging.

Be especially vigilant when it comes to canned goods – look for BPA-free on the label, or buy those packaged in glass jars instead. Buying fresh or frozen fruits and vegetables instead of canned is another alternative – and most likely the best option.

It’s not just BPA plastic that is a concern – other plastics that are deemed safe for use with food are considered a health risk too.

A 2011 study showed that most plastic products trigger an estrogen effect. Of the 455 common products tested (even those that were BPA free) 70% showed some sort of estrogenic activity. Alarmingly, when subjected to conditions like microwaving and dishwashing, that number jumped to 95%.

A common type of plastic used in food packaging are phthalates – which are associated with changes in development of the male brain, genital defects, metabolic abnormalities and reduced testosterone in babies and adults.

Soda bottles, water bottles and cooking oil bottles are all made from PET (polyethylene terephthalate) plastic. They leach acetaldehyde – a probable human carcinogen, according to the EPA – into our food and drinks.

At a time when so many of us are concerned with buying organic food, we need to be more aware of how we store that food.

There’s little point paying a premium price for chemical-free food if we’re going to store it in a plastic lunchbox which will simply leach similar chemicals into it. Instead try this 10 Piece Glass Food Storage Set.

Are you sold on the health-destroying abilities of BPA yet?

If so, you can avoid this chemical, particularly in relation to food, by buying products that come in BPA-free packaging.

Be especially vigilant when it comes to canned goods – look for BPA-free on the label, or buy those packaged in glass jars instead. Buying fresh or frozen fruits and vegetables instead of canned is another alternative – and most likely the best option.

This item alone needed a whole article to list its associated health and environmental concerns which you can read here.

In a nutshell, most single-cup coffee makers (like Nespresso, Keurig, and Dolce Gusto) contain plastics in both the machine and the pods – including BPA.

Given that simple dishwashing causes plastic to leach chemicals out at a higher rate, what effect does passing almost boiling water through the plastic coffee pods do?

Of course, mixing this with acidic coffee grounds may expose us to even more chemicals.

Aside from chemicals, these coffee makers are just plain unhygienic. In a test of 28 machines, over half of them contained in excess of 4 million colonies of harmful bacteria and mold.

If you can’t forgo your morning caffeine kick, investing in an alternative coffee maker is a good idea. Check out some of the options listed here.